The Kiss of Death – Book Review 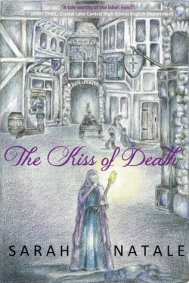 I know I do not normally post my book reviews on here, but today I am going to make an exception. Sarah Natale sent me her book for free in exchange for an honest review, so I can completely promise you what you are about to read is my honest thoughts.
The Kiss of Death is a 48 page educational book which follows a well off girl in the time of the bubonic plague. Through Elizabeth, readers will learn about what it was like living through the plague, and also what it was like living in these times before it.
As the plague gets worse, Elizabeth is locked up in a plague house with her family. She knows she must do what she can to escape in order to survive, and to get back to the boy she loves.
I rated this 4 out of 5 stars on Goodreads, because although I though this would be a great read for schools, I personally though it could use some more emotional descriptions. There was a lot of telling, but not enough showing. I would have liked to feel more in depth what Elizabeth was feeling; particularly with certain deaths. It was still a good book, though, which is why I only left out that one star.
There is religious mention in this book, but in all honesty, it is necessary. The church played a massive part in the lives of people in medieval times. the church even told people what food they could eat and when they could eat it; so I really don’t think you can teach about medieval times without mentioning the church. Even so, I think Sarah Natale was able to weave it into the story in a way that non religious or people of a different religion should be able to read without feeling uncomfortable. I personally am not religious, and found it fine.
Anyways, I recommend this book to anyone who wants to learn more about both the plague and medieval times. I particularly recommend this as a potential read to teachers or homeschooling parents. There are even brainstorming questions at the back.
Before I go, I just have to say Sarah Natale is young, this was her debut book, and it was surprisingly good. Sarah is for sure an author to keep an eye on because she might just end up as the next big author.

3 responses to “The Kiss of Death – Book Review”